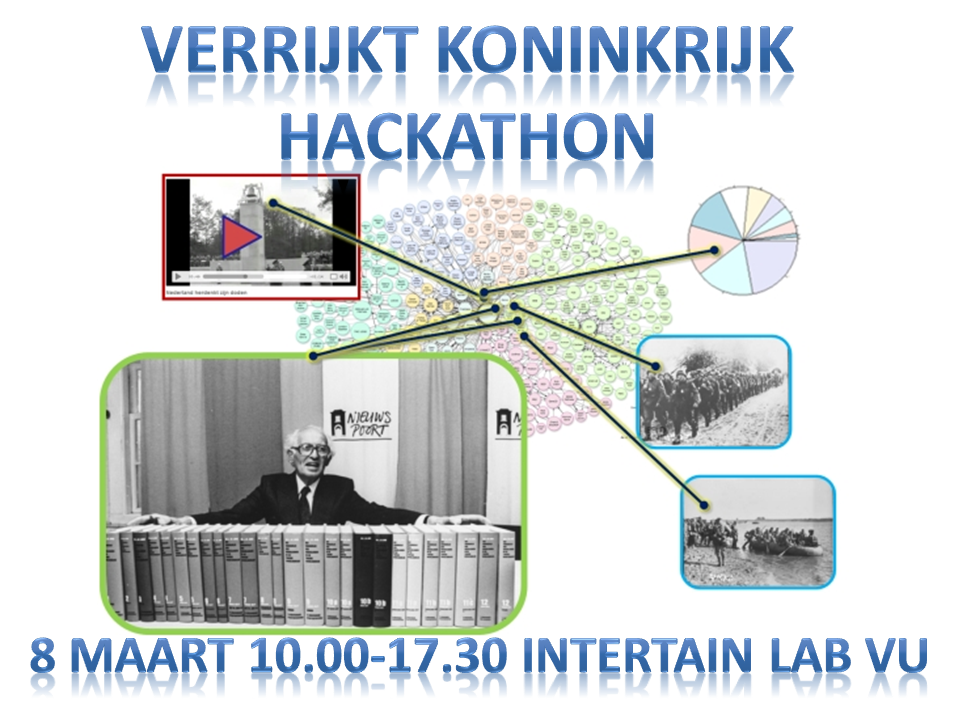 On Friday March 8, I will organize a small ‘hackathon’ workshop sponsored by the Network Institute in the context of the Verrijkt Koninkrijk project. In this project, we have created a linked data set for “Het Koninkrijk der Nederlanden in WoII” and linked it to some other datasets. We have shown some nice applications but would really like to show how this linked data can be used to create all kinds of nice applications/mashups/visualisations. If you, or any of your students, would like to join in, please let me know! A real hackathon has pizza, coke and prizes so I will definitely make sure that these things are present in our hackathon as well! The hackathon is the whole friday from 10h-17.30 in the Intertain Lab of the VU but you can obviously join half a day or just pop in. If you want to have a sneak peek at the data: here is The Verrijkt Konikrijk Semantic Layer and here’s the search interface (non-semantic, still very nice) Please send me a mail at (v.de.boerATvu.nl) or leave a message below if you are interested in hacking along, so I can order enough pizza’s 🙂

This friday, a brand new course at the VU University Amsterdam came to a satisfying close. The ICT 4 Development course (ICT4D) was offered to VUA Computer Science students for the first  year and I feel it was a success. The course, which was a collaboration between the Computer Science department and the Center for International Cooperation of the same university, aimed to teach students how one should go about designing and deploying ICT projects in developing areas.

To this end, the students learned about the importance of considering local socio-economic contexts but also got to experience two technologies often used for development projects. The students received a crash course in the Sugar operating system for the XO laptop from the One Laptop Per Child project and were presented with a tutorial on VoiceXML for developing voice-based applications. Students formed groups and chose either one of these technologies to solve a real-world problen in its development context.

The course ended today with student group presentations. Three groups presented an XO deployment. One of these included an agricultural program in Namibia that involves teaching children about growing local food next to their schools. The XO laptop can assist this education by providing tips for growing the crops. Two other presentations focused on XO deployments in neighbouring countries Iran and Iraq and included mockups and prototypes for XO programs (activities) that assist children both inside and outside school. There is even a good chance that the program in Iraq will actually be deployed and one of the teachers (who happened to be one of the student’s mother) was present at the presentation.

The fourth group developed an additional voice module for the RadioMarché system currently deployed in Mali, allowing local farmers to call in with their mobile phones when they want to sell produce. A voice menu enables them to tell the system how much of a specific product they have to offer and how much money they want in return.

All in all, this trip around the world showed how much the students have learned. We hope some of the projects will actually lead to real deployments and are looking forward to teaching the course again next year.