As a semantic web researcher, it is hard to sometimes not see ontologies and triples in aspects of my private life. In this case, through my contacts with dancers and choreographers, I have since a long time been interested in exploring knowledge representation for dance. After a few failed attempts to get a research project funded, I decided to let enthusiastic MSc. students have a go to continue with this exploration. This year, two Information Sciences students, Josien Jansen and Ana-Liza Tjon-a-Pauw, were willing to take up this challenge, with great success. With their background as dancers they did not only have the necessary background knowledge at but also access to dancers who could act as study and test subjects.

The questions of the two projects was therefore: 1) How can we model and represent dance in a sensible manner so that computers can make sense of choreographs and 2) How can we communicate those choreographies to the dancers?

Josien’s thesis addressed this first question. Investigating to what extent choreographers can be supported by semi-automatic analysis of choreographies through the generation of new creative choreography elements. She conducted an online questionnaire among 54 choreographers. The results show that a significant subgroup is willing to use an automatic choreography assistant in their creative process. She further identified requirements for such an assistant, including the semantic levels at which should operate and communicate with the end-users. The requirements are used for a design of a choreography assistant “Dancepiration”, which we implemented as a mobile application. The tool allows choreographers to enter (parts of) a choreography and uses multiple strategies for generating creative variations in three dance styles. Josien  evaluated the tool in a user study where we test a) random variations and b) variations based on semantic distance in a dance ontology. The results show that this latter variant is better received by participants. We furthermore identify many differences between the varying dance styles to what extent the assistant supports creativity.

In her thesis, Ana-Liza dove deeper into the human-computer interaction side of the story. Where Josien had classical ballet and modern dance as background and focus, Ana-Liza looked at Dancehall and Hip-Hop dance styles. For her project, Ana-Liza developed four prototypes that could communicate pieces of computer-generated choreography to dancers through Textual Descriptions, 2-D Animations, 3-D Animations, and Audio Descriptions. Each of these presentation methods has its own advantages and disadvantages, so Ana-Liza made an extensive user survey with seven domain experts (dancers). Despite the relatively small group of users, there was a clear preference for the 3-D animations. Based on the results, Ana-Liza also designed an interactive choreography assistant (IDCAT).

The combined theses formed the basis of a scientific article on dance representation and communication that was accepted for publication in the renowned ACE entertainment conference, co-authored by us and co-supervisor Frank Nack.

You can find more information here: 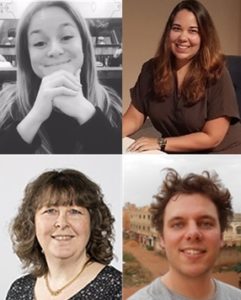 VU’s Network Institute has a yearly Academy Assistant programme where small interdisciplinary research projects are funded. Within these projects, Master students from different disciplines are given the opportunity to work on these projects under supervision of VU staff members. As in previous years, this year, I also participate as a supervisor in one of these projects, in collaboration with Petra Bos from the Applied Linguistics department. And after having found two enthusiastic students: Dana Hakman from Information Science and Cerise Muller from Applied Linguistics, the project has just started.

Our project “ABC-Kb: A Knowledge base supporting the Assessment of language impairment in Bilingual Children” is aimed at supporting language therapists by (re-)structuring information about language development for bilingual children. Speech language therapists and clinical linguists face the challenge of diagnosing children as young as possible, also when their home language is not Dutch. Their achievements on standard (Dutch) language tests will not be reliable indicators for a language impairment. If diagnosticians had access to information on the language development in the Home Language of these children, this would be tremendously helpful in the diagnostic process.

This project aims to develop a knowledge base (KB) collecting relevant information on the specificities of 60 different home languages (normal and atypical language development), and on contrastive analyses of any of these languages with Dutch. To this end, we leverage an existing wiki: meertaligheidentaalstoornissenvu.wikispaces.com