DOWNSCALE 2013, the 2nd international workshop on downscaling the Semantic Web was held on 19-9-2013 in Geneva, Switzerland and was co-located with the Open Knowledge Conference 2013. The workshop seeks to provide first steps in exploring appropriate requirements, technologies, processes and applications for the deployment of Semantic Web technologies in constrained scenarios, taking into consideration local contexts. For instance, making Semantic Web platforms usable under limited computing power and limited access to Internet, with context-specific interfaces.

The workshop accepted three full papers after peer-review and featured five invited abstracts. in his keynote speech, Stephane Boyera of SBC4D gave a very nice overview of the potential use of Semantic Web for Social & Economic Development. The accepted papers and abstracts can be found in the  downscale2013 proceedings, which will also appear as part of the OKCon 2013 Open Book.

After the presentations, we had fruitful discussions about the main aspects of ‘downscaling’. The consensus seemed to be that Downscaling involved the investigation and usage of Semantic Web technologies and Linked Data principles to allow for data, information and knowledge sharing in circumstances where ‘mainstream’ SW and LD is not feasible or simply does not work. These circumstances can be because of cultural, technical or physical limitations or because of natural or artificial limitations. 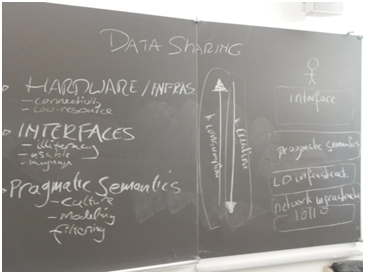 The figure  illustrates a first attempt to come to a common architecture. It includes three aspects that need to be considered when thinking about data sharing in exceptional circumstances:

The right side of the picture illustrates the downscaling stack.

On the top of this stack sits the human in the loop, the end use that wants to share data. On the bottom of the stack we can see the bits that make up the data. Downscaling is concerned with the levels of abstraction in between:

Other important points to raise are:

One thought on “DownScale 2013 workshop”