Gossa and Myrthe, students from VU University Amsterdam are currently in Northern Ghana,  doing fieldwork for the  interdisciplinary ICT4D research project “Knowledge Sharing for the Rural Poor“. For this project they received a grant from the Network Institute, and are supported by W4RA (including VU’s Web and Media) . The University for Development Studies  Ghana – one of the partners of W4RA – is kindly offering hospitality and assisting the students in their field research. 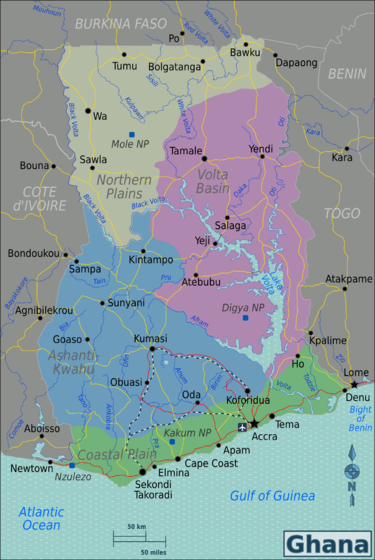 26th, we visited the University of Development Studies in Tamale. ICT researcher Francis Dittoh brought us there and we met up with some other ICT researchers, whom we would later interview on their work in ICT4D. They seemed to be aware of the development issues the local farmers are struggling with, but they are not actively working in this field. Two of the ICT researchers were quite enthusiastic and offered to volunteer for our project if we manage to complete the tool we are aiming to build.

On friday, we decided to visit the local swimming pool.Since the average temperature here in Northern Ghana is about 40 degrees Celsius and it has a humidity of only 12 percent, swimming was more than welcome. We even taught some local people how to swim, which was not a great success

On Saturday we made a long road trip on the back of a motor cycle. We planned to visit the rural village ofGaliwei in order to interview farmers living in a remote and poor area. The village is the home of our host’s family. We were going to interview his father who is the butcher’s chief.  On our way we really enjoyed the beautiful Ghanaian scenery; waving children, small towns and crocodile ponds, where people collect water and wash their clothes. When we left, our host was wearing a warm, neat jacket. He told us it was for protection in order to stay clean while driving. He asked us if we also wanted to wear a jacket. But it was so hot that we decided not to. However, 80 percent of the road consisted of loose red sand with large wholes on it. So, when we arrived,  we looked like two red puppets, fully covered in red sand.

In the village we were warmly welcomed by cheering and laughing children. We took some pictures and got rid of most of the mud, after which we entered the butcher chief’s hut. An old man dressed in traditional clothing was sitting on the ground. It was our host’s father, two older brother also accompanied the interview. Our host functioned as our translator. Every time one of us asked a question, it was followed by an intense discussion between the informants in their local language and later translated in English. After the interview we offered the butcher’s chief dutch cookies named stroopwafels. They broke the them into small bits and gave every child a bit. Before we went back, we needed to do some formal greetings to some more relatives of our host. It was already late in the afternoon when we arrived back home after another long ride on the motor cycle.

Monday we left for our final destination: the Zaleriguvillage. Situated near Bolgatanga in the upper north-east region. Professor Saa Dittoh picked us up and drove us there in two and a half hours. The village is his birth town and we were kindly invited at his family’s  compound. Zalerigu can be considered as poor, remote and rural. A perfect village for our project, however, less perfect for personal convenience. We were warmly welcomed by Prof. Saa’s family. The family home is made of concrete and has no running water. However, electricity is available. So, we were very pleased to stay here.

One thought on “Gossa and Myrthe in Ghana – part 1”