In the context of our ArchiMediaL project on Digital Architectural History, a number of student projects explored opportunities and challenges around enriching the colonialarchitecture.eu dataset. This dataset lists buildings and sites in countries outside of Europe that at the time were ruled by Europeans (1850-1970).

Patrick Brouwer wrote his IMM bachelor thesis “Crowdsourcing architectural knowledge: Experts versus non-experts” about the differences in annotation styles between architecture historical experts  and non-expert crowd annotators. The data suggests that although crowdsourcing is a viable option for annotating this type of content. Also, expert annotations were of a higher quality than those of non-experts. The image below shows a screenshot of the user study survey. 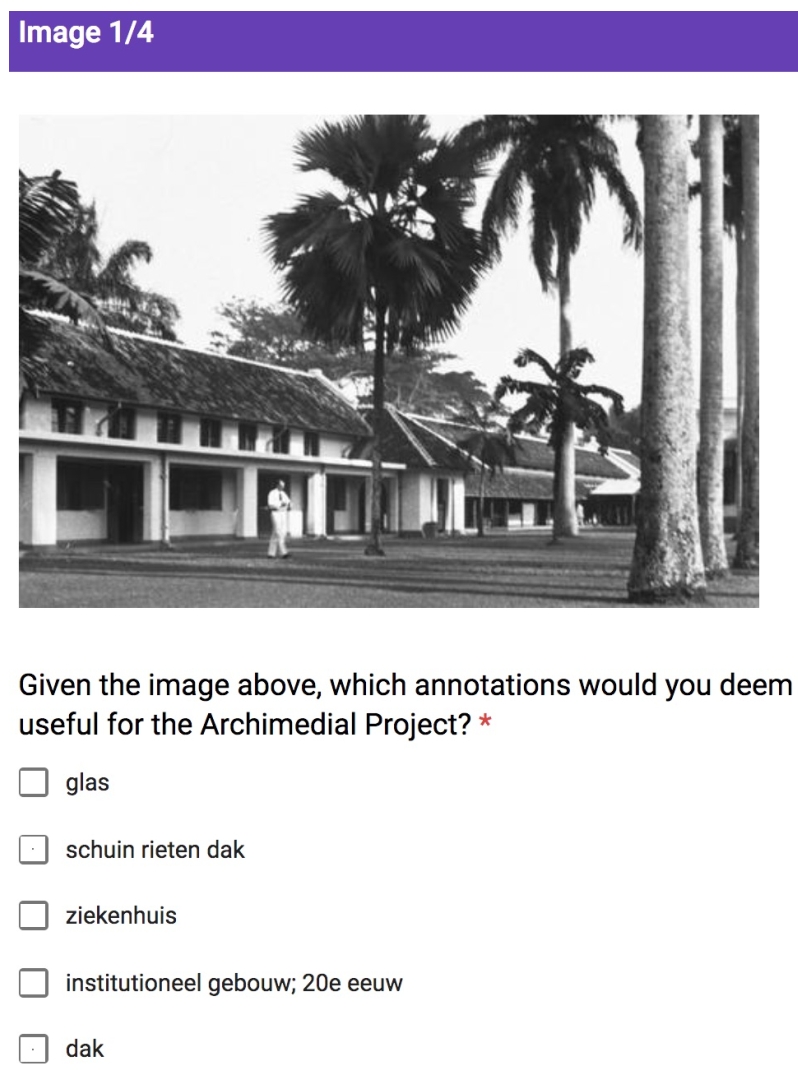 Rouel de Romas also looked at crowdsourcing , but focused more on the user interaction and the interface involved in crowdsourcing. In his thesis “Enriching the metadata of European colonial maps with crowdsourcing”  he -like Patrick- used the Accurator platform, developed by Chris Dijkshoorn. A screenshot is seen below.  The results corroborate the previous study that the in most cases the annotations provided by the participants do meet the requirements provided by the architectural historian; thus, crowdsourcing is an effective method to enrich the metadata of European colonial maps.

Finally, Gossa Lo looked at automatic enrichment using OCR techniques on textual documents for her Mini-Master projcet. She created a specific pipeline for this, which can be seen in the image below. Her code and paper are available on this Github page:https://github.com/biktorrr/aml_colonialnlp

The ICT4D project CARPA, funded by NWO-WOTRO had its first stakeholder workshop today at the Amsterdam Business School of UvA. From our project proposal: The context for CARPA (Crowdsourcing App for Responsible Production in Africa) lies in sustainable and responsible business. Firms are under increasing pressure to ensure sustainable, responsible production in their supply chains.. Lack of transparency about labour abuses and environmental damages has led some firms to cease purchases from the region

.With an interdisciplinary partnership of local NGOs and universities in DRC, Mali, and South Africa, this project aims to generate new evidence-based knowledge to improve transparency about business impacts on responsible production.

Co-creating a smartphone application, we will use crowdsourcing methods to obtain reports of negative social and environmental business impacts in these regions, and follow them over time to understand access to justice and whether and how remediation of such impacts occurs. Data integration and visualization methods will identify patterns in order to provide context and clarity about business impacts on sustainability over time. A website will be developed to provide ongoing public access to this data, including a mapping function pinpointing impact locations.

The project will be led by Michelle Westermann-Behaylo from UvA, with the research work on the ground being executed by UvA’s Francois Lenfant and Andre Baart. Marcel Worring and myself are involved in supervisory roles.

[This post is based on Anggarda Prameswari’s Information Sciences MSc. Thesis]

For her M.Sc. Project, conducted at the Netherlands Institute for Sound and Vision (NISV), Information Sciences student Anggarda Prameswari (pictured right) investigated a local crowdsourcing application to allow NISV to gather crowd annotations for archival audio content. Crowdsourcing and other human computation techniques have proven their use for collecting large numbers of annotations, including in the domain of cultural heritage. Most of the time, crowdsourcing campaigns are done through online tools. Local crowdsourcing is a variant where annotation activities are based on specific locations related to the task.

Anggarda, in collaboration with NISV’s Themistoklis Karavellas, developed a platform called “Elevator Annotator”, to be used on-site. The platform is designed as a standalone Raspberry Pi-powered box which can be placed in an on-site elevator for example. It features a speech recognition software and a button-based UI to communicate with participants (see video below).

The effectiveness of the platform was evaluated in two different locations (at NISV and at Vrije Universiteit) and with two different modes of interaction (voice input and button-based input) through a local crowdsourcing experiment. In this experiments, elevator-travellers were asked to participate in an experiment. Agreeing participants were then played a short sound clip from the collection to be annotated and asked to identify a musical instrument.

The results show that this approach is able to achieve annotations with reasonable accuracy, with up to 4 annotations per hour. Given that these results were acquired from one elevator, this new form of crowdsourcing can be a promising method of eliciting annotations from on-site participants.

Furthermore, a significant difference was found between participants from the two locations. This indicates that indeed, it makes sense to think about localized versions of on-site crowdsourcing.

[This post describes Aschwin Stacia‘s MSc. project and is based on his thesis]

There are many online and private film collections that lack structured annotations to facilitate retrieval. In his Master project work, Aschwin Stacia explored the effectiveness of a crowd-and nichesourced film tagging platform,  around a subset of the Eye Open Beelden film collection.

Specifically, the project aimed at soliciting annotations appropriate for various types of media scholars who each have their own information needs. Based on previous research and interviews, a framework categorizing these needs was developed. Based on this framework a data model was developed that matches the needs for provenance and trust of user-provided metadata.

A crowdsourcing and retrieval platform (FilmTagging) was developed based on this framework and data model. The frontend of the platform allows users to self-declare knowledge levels in different aspects of film and also annotate (describe) films. They can also use the provided tags and provenance information for retrieval and extract this data from the platform.

To test the effectiveness of platform Aschwin conducted an experiment in which 37 participants used the platform to make annotations (in total, 319 such annotations were made). The figure below shows the average self-reported knowledge levels.

The annotations and the platform were then positively evaluated by media scholars as it could provide them with annotations that directly lead to film fragments that are useful for their research activities.

Nevertheless, capturing every scholar’s specific information needs is hard since the needs vary heavily depending on the research questions these scholars have.