I made some exercises a while ago but keep re-using them for SPARQL tutorials and hands on sessions. I now moved them to a new webpage. This page presents SPARQL queries in increasing complexity that one can copy-paste into the interactive query field of the Dutch Ships and Sailors live triple store.

Have fun with these Handson SPARQL excercises (updated May 2017)

Below you can also find the slides I used this tuesday for a workshop around Linked Data, Dutch Ships and Sailors and SPARQL, which form the introduction to the handson session.

This is a nice companion piece to the more technical description of the dataset which was published in the proceedings of ISWC 2014. The new version highlights more the general setup of the project and the considerations and innovations of the project from a historical point of view.

Since submission of this ‘mid-term project description’, the DSS data cloud has been expanding, and the ‘development’ version of the triple store now hosts six datasets thanks to the work of Jeroen Entjes (see the datacloud figure).

The Dutch maritime supremacy during the Dutch Golden Age has had a profound influence on the modern Netherlands and possibly other places around the globe. As such, much historic research has been done on the matter, facilitated by thorough documentation done by many ports of their shipping. As more and more of these documentations are digitized, new ways of exploring this data are created.

This master project uses one such way. Based on the Dutch Ships and Sailors project digitized maritime datasets have been converted to RDF and published as Linked Data. Linked Data refers to structured data on the web that is published and interlinked according to a set of standards. This conversion was done based on requirements for this data, set up with historians from the Huygens ING Institute that provided the datasets. The datasets chosen were those of Archangel and Elbing, as these offer information of the Dutch Baltic trade, the cradle of the Dutch merchant navy that sailed the world during the Dutch Golden Age.

Along with requirements for the data, the historians were also interviewed to gather research questions that combined datasets could help solve. The goal of this research was to see if additional datasets could be linked to the existing Dutch Ships and Sailors cloud and if such a conversion could help solve the research questions the historians were interested in.
Data visualization showing shipping volume of different datasets.

As part of this research, the datasets have been converted to RDF and published as Linked Data as an addition to the Dutch Ships and Sailors cloud and a set of interactive data visualizations have been made to answer the research questions by the historians. Based on the conversion, a set of recommendations are made on how to convert new datasets and add them to the Dutch Ships and Sailors cloud. All data representations and conversions have been evaluated by historians to assess the their effectiveness.

The data visualizations can be found at http://www.entjes.nl/jeroen/thesis/. Jeroen’s thesis can be found here: Msc. Thesis Jeroen Entjes 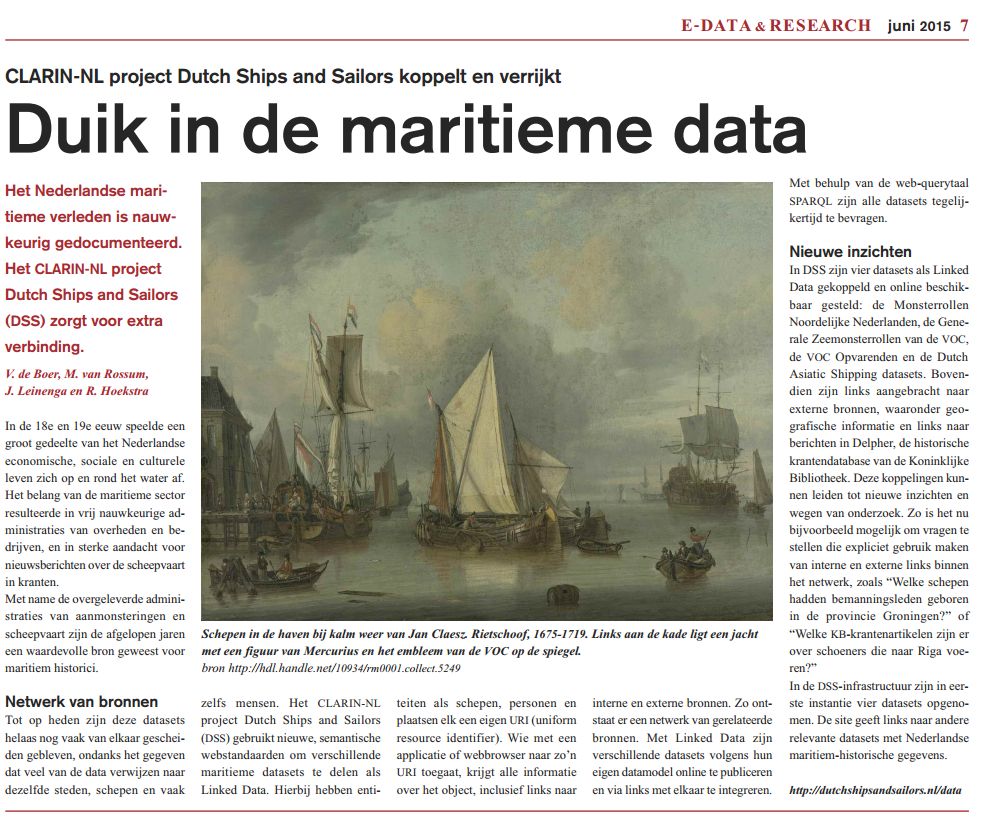 This year’s third issue of E-Data and Research magazine features an article about the Dutch Ships and Sailors project. The article (in Dutch) describes how our project provides new ways of interacting with Dutch maritime data. So far, four datasets are present in the DSS data cloud but we are currently extending the dataset with two new datasets. More on that later… 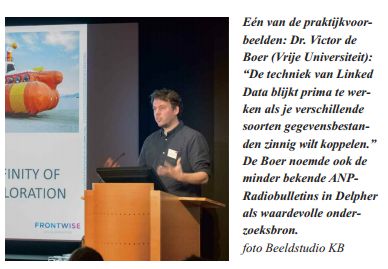 In the same issue, there is an article about the workshop around newspaper data as provided by the National Library. This includes a picture of me presenting the DIVE project.

You can read these articles and much more more in the june 2015 issue of E-Data and Research.  And the backlog at www.edata.nl.

For the LODLAM challenge, I submitted this entry on Dutch Ships and Sailors, which now includes a more user-friendly interface. You can watch me explain the project and the demonstrate the new interface in this five-minute video. You can also vote for this project at by clicking “like” at the entry page.